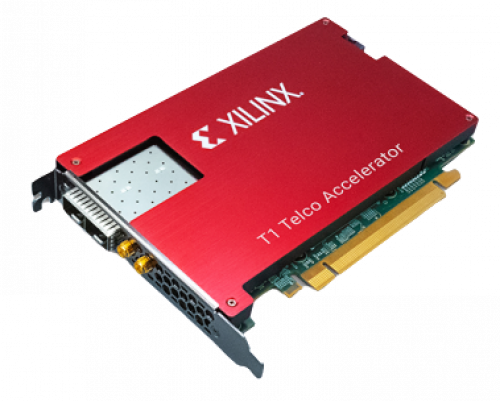 One issue with virtual baseband functions is that they are highly compute intensive, especially for functions such as channel coding. To address this, channel coding specialist AccelerCommTM is using the Xilinx T1 Telco Accelerator card to increase performance by cutting latency, significantly boost encoder/decoder throughput, and dramatically cut the number of CPUs needed, all while enabling impressive cost reductions.

In particular, the T1 card provides channel encoding/decoding based on a hardened LDPC codec, which is implemented as a configurable Soft-Decision Forward Error Correction (SD-FEC) hard IP block. This hardened LDPC core can be programmed with additional functionality on the programmable Logic to create a complete high-performance LDPC implementation to specific requirements.

The AccelerCommTM design on the T1 card is based on an 8-lane PCIe with 6 decoders and two decoders to deliver unprecedented uplink performance of 8,055 Mbps and downlink of 20,296 Mbps. This uplink performance could be doubled by introducing modulation onto the card, while downlink performance can be improved by faster clocking or higher parallelism on the encode wrapper. The massive improvement in uplink speed balances downlink/uplink performance for 4G and 5G networks, removing constraints for live streaming and other real-time applications.

AccelerCommTM has also added additional logic to shift data at significantly higher speeds. Often, when passing information from the CPU to the Xilinx Telco Accelerator card, the PCIe bus becomes the bottleneck. The logic optimizes the T1 card and the code running on the CPU to enable bus utilization as high as 87 percent.

To implement the high performance LDPC solution, AccelerCommTM provides users of the T1 card with an image or bit file that can be programmed into the L1 Offload Xilinx RFSOC device on the Telco Accelerator card as well as O-RAN compliant software to be installed on the server.

The T1 card holds much promise for the enablement of cost-effective O-RAN implementations. Currently O-RAN working group 6 is defining an open standard API called AAL from a number of candidates, BBdev from the DPDK organization being one of them. BBdev, or Base Band device, is an abstraction layer that decouples the application from hardware wireless functions, which appear as virtual devices.

AccelerCommTM has implemented its IP on the T1 Telco Accelerator card using the vendor-agnostic BBdev API as this gives operators a high performance card that is available and easy to use with compliant L1 software stacks. BBdev has support among many companies, including Intel, which originally initiated the API, and Xilinx.

Typically, L1 processing is around 40 percent of the server workload. With such a large portion of the workload doing LDPC an accelerator card using AccelerCommTM software offers a significant performance boost. Further, at higher bandwidths, many CPUs are needed to handle the LDPC processing. As the T1 Telco Accelerator card cuts the need for all these CPUs significantly, it brings down CAPEX.

There are many ways to accelerate LDPC coding from FPGAs to specialized processors and other cards such as the Intel N3000 which can all leverage the high performance AccelerComm TM IP. However, the combined solution from AccelerComm TM and Xilinx supporting the T1 card offers a fast, cost-effective way to boost performance of 5G networks by improving encoding and decoding throughput and reducing latency.

The Xilinx T1 card provides two SFP28 ports for fronthaul, making it suitable for two-sector with redundancy deployment. Here one SFP28 is used for traffic and the other for fallback. In another scenario, the card could provide a high RU/DU ratio by working directly with four sectors.

The Xilinx T1 card could also be used in a Front-Haul Gateway (FHGW) to offer the highest RU/DU ratio. The FHGW manages different 4G/5G remote radio heads (RRHs), that might have different splits or CPRI-based interfaces, enabling operators to use existing radios with O-RAN.

The AccelerCommTM LDPC solution for Xilinx T1 cards is available now, offering vastly reduced time to market for products with true 5G NR functionality. Operators can use the AccelerCommTM SD-FEC wrapper and server software to implement O-RAN or virtualized infrastructure today in a variety of scenarios.